(Below) A* was invented by researchers working on Shakey the Robot's path planning. 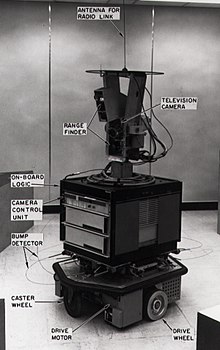 On a map with many obstacles, pathfinding from points AA to BB can be difficult. A robot, for instance, without getting much other direction, will continue until it encounters an obstacle, as in the path-finding example to the left below.

However, the A* algorithm introduces a heuristic into a regular graph-searching algorithm, essentially planning ahead at each step so a more optimal decision is made.