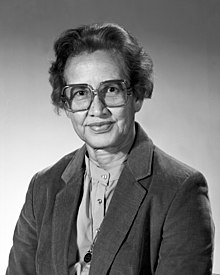 Creola Katherine Johnson (August 26, 1918 – February 24, 2020) was an American mathematician whose calculations of orbital mechanics as a NASA employee were critical to the success of the first and subsequent U.S. crewed spaceflights. During her 33-year career at NASA and its predecessor, she earned a reputation for mastering complex manual calculations and helped pioneer the use of computers to perform the tasks. The space agency noted her "historical role as one of the first African-American women to work as a NASA scientist".

Johnson's work included calculating trajectories, launch windows, and emergency return paths for Project Mercury spaceflights, including those for astronauts Alan Shepard, the first American in space, and John Glenn, the first American in orbit, and rendezvous paths for the Apollo Lunar Module and command module on flights to the Moon. Her calculations were also essential to the beginning of the Space Shuttle program, and she worked on plans for a mission to Mars.

"Outlier: the story of Katherine Johnson" maps the trajectory of this African American girl-wonder whose mathematical genius catapulted astronauts into space. From America's first attempt at manned space flights to the Space Shuttle program, Johnson was an integral part of NASA. Includes an interview with Johnson, whose life was profiled in the movie "Hidden Figures."