Ada Lovelace was an English mathematician and writer, chiefly known for her work on Charles Babbage's proposed mechanical general-purpose computer, the Analytical Engine. She is believed by some to be the first to recognise that the machine had applications beyond pure calculation, and to have published the first algorithm intended to be carried out by such a machine. As a result, she is often regarded as the first to recognise the full potential of computers and as one of the first to be a computer programmer. Others disregard her mathematical genius but agree that she was a "prophet of the computer age" Source: Wikipedia 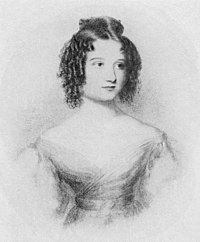 >>When she was a teenager, it is believed that her mathematical talents led her to a long working relationship and friendship with fellow British mathematician Charles Babbage, who is known as "the father of the computer".

>>She lost contact with her husband after confessing something to him on 30 August which caused him to abandon her bedside. It is not known what she told him.

According to the historian of computing and Babbage specialist Doron Swade:

"Ada saw something that Babbage in some sense failed to see. In Babbage's world his engines were bound by number...What Lovelace saw...was that number could represent entities other than quantity. So once you had a machine for manipulating numbers, if those numbers represented other things, letters, musical notes, then the machine could manipulate symbols of which number was one instance, according to rules"