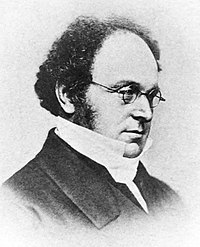 2.  Augustus De Morgan became blind in one eye a month or two after he was born.

What are De Morgan's Laws?

Example 1
Use De Morgan's law on the expression NOT(A AND B AND C).

Example 2
Use De Morgan's law on the expression NOT(A OR B OR C).