In electronics, a flip-flop or latch is a circuit that has two stable states and can be used to store state information – a bistable multivibrator. 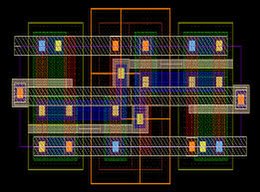 (Above) Layout for the silicon implementation of a six transistor SRAM memory cell.

The D flip-flop is an edge triggered device which transfers input data to Q on clock rising or falling edge. Data Latches are level sensitive devices such as the data latch and the transparent latch.

It also has two outputs, with one being logically inverse of other. The data input is either logic 0 or 1, meaning low or high voltage.

The D flip-flop tracks the input, making transitions with match those of the input D. The D stands for "data"; this flip-flop stores the value that is on the data line. It can be thought of as a basic memory cell. A D flip-flop can be made from a set/reset flip-flop by tying the set to the reset through an inverter. The result may be clocked.

The D Flip Flop is by far the most important of the clocked flip-flops as it ensures that ensures that inputs S and R are never equal to one at the same time. The D-type flip flop are constructed from a gated SR flip-flop with an inverter added between the S and the R inputs to allow for a single D (Data) input.

Why is it called the D Type Flip Flop?

The Q output always takes on the state of the D input at the moment of a rising clock edge. (or falling edge if the clock input is active low) It is called the D flip-flop for this reason, since the output takes the value of the D input or Data input, and Delays it by one clock count.