Alan Mathison Turing (June 1912 – 7 June 1954) was an English mathematician, computer scientist, logician, cryptanalyst, philosopher, and theoretical biologist. Turing was highly influential in the development of theoretical computer science, providing a formalisation of the concepts of algorithm and computation with the Turing machine, which can be considered a model of a general-purpose computer. Source: Wikipedia 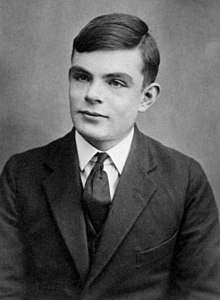 >> During the Second World War, Turing was a leading participant in the breaking of German ciphers at Bletchley Park.

>> When Turing was 39 years old in 1951, he turned to mathematical biology, finally publishing his masterpiece "The Chemical Basis of Morphogenesis" in January 1952. He was interested in morphogenesis, the development of patterns and shapes in biological organisms. He suggested that a system of chemicals reacting with each other and diffusing across space, termed a reaction-diffusion system, could account for "the main phenomena of morphogenesis".

>> In January 1952, Turing was 39 when he started a relationship with Arnold Murray, a 19-year-old unemployed man. It was a tumultous relationship and Murray admitted to knowing a man who had burgled Turing's house. Turing repoted Murray to the police, and it was as a result of this police report that news of their affair (homosexuality was illegal at the time) came out.

>> Turing also habitually ate an apple before going to bed, and it was not unusual for the apple to be discarded half-eaten.

>> On 8 June 1954, Turing's housekeeper found him dead at the age of 41; he had died the previous day. Cyanide poisoning was established as the cause of death